Literature / The World of Poo 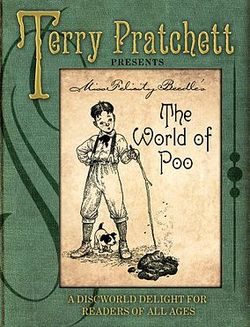 The World of Poo (in full Terry Pratchett presents Miss Felicity Beedle's The World of Poo) is a sort of follow-up to Where's My Cow?, a children's book-slash-Discworld artifact based on a book that Sam Vimes reads to his son. Young Sam being older, the book is aimed at kids rather than toddlers. (In Snuff, Vimes reflects that Miss Beedle knows exactly what will make a six-year-old boy laugh until he's sick.) Unlike Where's My Cow?, which is a story about the story, World of Poo is told "straight", just the way Young Sam would read it.

It tells the story of a young boy named Geoffrey, who travels to Ankh-Morpork from a small town in the Sto Plains, and quickly becomes fascinated by the wide range of poo that exists in the city, beginning a poo collection.