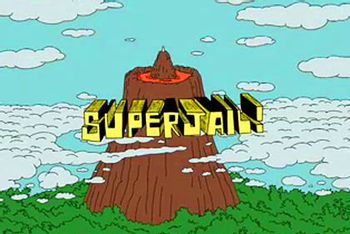 "When my father, the prison mogul, left me his legacy, I swore to protect the art of incarceration, but the world is not ready for my methods. So I went outside the system, and I created Superjail!"
— The Warden
Advertisement:

Part of the Adult Swim lineup, Superjail! is a surreal and very gory comedy series about a magical jail and its deranged staff. The show takes place in the eponymous prison, built inside an extinct volcano inside an active volcano, and home to endless numbers of ultra-violent Red Shirt prisoners. The series started in 2008 and lasted for four seasons.

The series's trademark is that by the end of each episode, there will be a long sequence of nothing but surreal carnage from corner to corner of the screen. The series' visual effects, of detailed and highly expressive animation often running at twice the usual framerate of normal animation.

Controlling the jail is the Warden (David Wain), an eccentric and twisted Willy Wonka lookalike with a flair for the dramatic and a face like Josef Mengele. Joining him are:

The first season was animated by Augenblick Studios in Brooklyn, New York. A second season began airing on April 4, 2011 at midnight, with animation this time being handled by Titmouse, Inc, in California, and the new Titmouse, Inc. branch opening in Manhattan, New York. It had episodes devoted to fleshing out the characters and their backstories, and shifted its focus to creative close-up gore rather than mass bloodbath sequences. A third season aired on September 30, 2012, and brought back the bloodbaths, furthered the Character Development, as well as changing the animation back to a style that was a little more reminiscent of Augenblick's episodes.

The fourth season aired June 15th, 2014. Unlike the previous three seasons, there were six episodes and not a full order of ten. After a year of no indication of the show's fate, it was revealed in the 2015 Adult Swim announcements that the show was not renewed for a fifth season.

Example of:
Better to Die than Be Killed