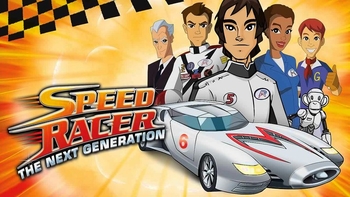 A young man, somewhere in a desert, anxiously awaits his first day at the Racing Academy to become a great car racer. He immediately becomes the new guy - he's always picked on, makes only two friends, and arrives with no racing car of his own. Then he discovers the remains of the one and only Mach 5 in a near-by junkyard. With his rebuilt Mach 6, unusual racing talent, and mysterious lineage, the man realizes for the first time in his life that he is Speed Racer's second-born long-lost son!

Speed Racer: The Next Generation is the third consecutive television adaptation, a Revival created to coincide with the 40th anniversary of the entire franchise and in conjunction to the wide release of the live-action feature film, and a Sequel Reset taking place 40 years from the original storyline

Nicktoons Network aired the entire 26-episode first season from 2008 to 2009. If the stiff, Flash-animated characters look familiar, it's because Animation Collective, probably best known for animating the Nicktoons Network's first original series, Kappa Mikey, produced this series. It is quite possibly the most successful of the adaptations, considering the first twonote The New Adventures of Speed Racer and Speed Racer X were both canceled during their runs. 95% of the characters are brand new anyway, which makes for a more original story, yet when it does get nostalgic, the tributes are amazingly accurate. The late Peter Fernandez, the producer of the dub of the original show, as well as the lyricist for the English theme song and the voice of Speed, was brought in to voice an adult Spritle.

A second season premiered on March 24th, 2011. Toonz Entertainment in India (with assistance from Chinese subcontractor Wild Hippo) took over the outsourced animation this time, since Animation Collective had financial problems. Speed Sr. reveals more about his motives for going into hiding in this season, and we get more information about the Committee. After his death, the voices of Peter Fernandez's roles were replaced with another voice actor.