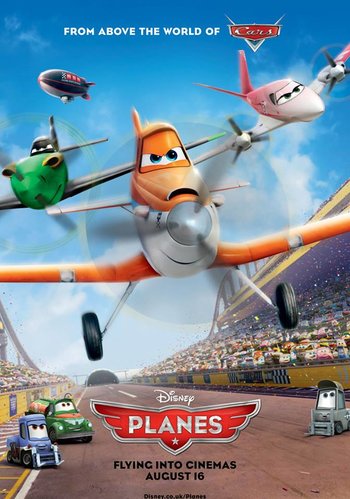 Planes is a Spin-Off film based on the Disney/Pixar franchise Cars, produced by Disneytoon Studios, the studio behind the Tinker Bell film series. The film is directed by Klay Hall and is under the creative leadership of John Lasseter, who also directed Cars and Cars 2.

Dusty Crophopper is a young single-prop agriculture plane that lives in the small town of Propwash Junction. Dusty dreams of competing alongside his high-flying heroes in the "Wings Around the Globe" Rally, but suffers from a crippling fear of heights. His mentor Skipper is convinced that Dusty has the engine to compete with the best, and helps encourage him to pursue his lifelong dreams. But if Dusty wants to make his dreams a reality, he'll need to face his fears and push himself further than he ever imagined.

Planes, originally planned for a Direct-to-DVD release in Spring 2013, was released theatrically instead on August 9, 2013. A sequel, called Planes: Fire & Rescue, was released July 18, 2014.

When Bulldog makes fun of El Chu, he is offended and shames him.

When Bulldog makes fun of El Chu, he is offended and shames him.