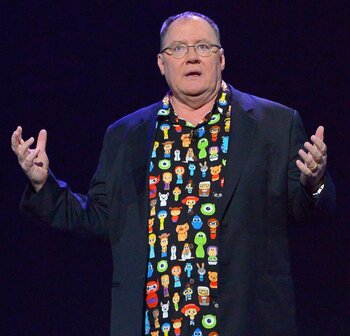 He was with Pixar since the early days at Lucasfilm. Originally a Disney animator, Lasseter was inspired by TRON to try to make a computer-animated feature film, but was fired while trying to adapt Thomas M. Disch's novella The Brave Little Toaster (which was distributed by Disney but made by independent company Hyperion). At Lucasfilm, he created its first four short films, including his most famous short, Luxo Jr. He also directed Pixar's first feature film and the world's first CGI movie, Toy Story, for which he got a Special Achievement Award at the Oscars. After Toy Story 2, he stuck to executive producing Pixar's films for a while, though he still provided creative input into the companies' films. He returned to directing with the film Cars, which, despite performing weaker and not being as well received as the other Pixar films, still got more good reviews than most other animated films that year and made a truckload of money, particularly through merchandising. His latest directorial effort, Cars 2, proved an artistic debacle that shattered the near spotless artistic reputation of the company such as leading to Pixar being shut out of contention for that year's Best Animated Feature Oscar for the first time in the award's history. Not wanting to cause the studio further embarrassment, John snapped into action by postponing the Troubled Production The Good Dinosaur by a year to ensure that the next film in their roster, Inside Out, would be on par with their other classics.

John's eye for quality is no doubt the reason why, when Disney merged with Pixar back in 2006, he was not only made Chief Creative Officer of both Pixar and Disney Feature Animation, but also Principal Creative Advisor for Disney's Imagineering department, meaning he even had creative say in theme park rides. While his decisions at Disney did cause a bit of behind-the-scenes drama (his insistence on changes for Bolt led director Chris Sandersnote of Lilo & Stitch, a film which Lasseter reportedly greatly disliked despite it being Disney's biggest combined critical and commercial success in the 2000s decade up to that point to leave the company), general consensus is that he helped the studio considerably during his tenure. After becoming Chief Creative Officer, he cancelled all of the Disney sequels in production and greenlit The Princess and the Frog. Lasseter then opted for DisneyToon Studios to produce more original properties and spinoffs, such as the Tinker Bell films and the spinoff from Cars, titled Planes. Somewhat ironically, the hope for Disney to continue creating traditionally animated feature films depended with him for a long time; despite playing a large part in computer animation becoming more dominant, he expressed interest in bringing 2D animation back.

He is also a good friend of famed anime director Hayao Miyazaki, and has overseen the English dubbing of some of his films.

A few days from before the release of Coco, Lasseter publicly announced that he would take a six month sabbatical from the company after a number of female employees came forward with claims of sexual misconduct (this being a few months after Harvey Weinstein and several other Hollywood people were accused of the same, it's safe to assume he didn't want the studio's work to be Overshadowed by Controversy), along with writer Rashida Jones announcing her departure from Toy Story 4 amidst accusations that he mistreated female and minority artists.

In June 2018, Disney announced that they had no intention of renewing their contract with Lasseter, meaning he would no longer hold an office at either Pixar or Walt Disney Animation Studios, ceasing his involvement with the studio at the end of the year. Pete Docter and Jennifer Lee replaced his position at Pixar and Disney Animation, respectively. A year later, up and coming studio Skydance Animation put him on their creative team, a controversial move that resulted in actress Emma Thompson stepping down from Luck (2022), a movie the studio was producing.

Tropes associated with films he has directed: