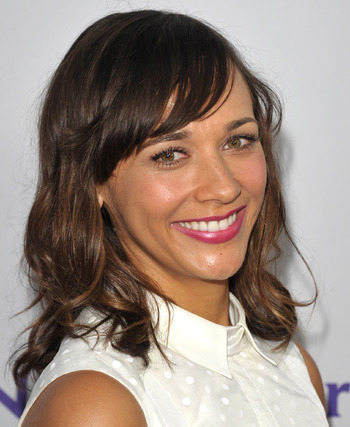 Rashida Leah Jones (born February 25, 1976 in Los Angeles, California) is an American actor and screenwriter, best known for her roles as Karen Filippelli on The Office, Ann Perkins on Parks and Recreation, and Angie Tribeca on Angie Tribeca. She's also one of Quincy Jones' daughters (with Peggy Lipton of The Mod Squad and Twin Peaks), but her own fame has eclipsed this association for many.
Advertisement:

Her father is the famous music producer Quincy Jones, who produced all of Michael Jackson’s early albums. Raised in Bel Air, she's half-black (from her father) and half-Ashkenazi Jewish (from her mother, actor Peggy Lipton) and went to Harvard. There, she was an active member of the Black Students' Association and performed in a production of For Colored Girls... as well as acting as musical director of the University's A Cappella group. In high school she was also interested in theatre, plus a member of the Honor Society and voted Most Likely To Succeed. Oh, and she slammed Tupac when he insulted her parents' interracial marriage, although they later made up when her sister started dating him.

Straight out of college, she got her first role (Johanna on The Last Don), but her first big role came in the form of Boston Public's Louisa Fenn in 2000. For her portrayal of the multi-faceted bi-racial character, she was nominated for an award from the NAACP. After leaving the show, she went through various roles on other television shows, including the British NY-LON and cop drama Wanted, before landing the part of Karen Filippelli on The Office. Karen is also of unknown ethnicity, a recurring element to her characters. She remained on this show for five years, from 2006 to 2011, also starring in its Spiritual Successor Parks and Recreation as Ann Perkins until 2015 and earning two more NAACP noms. In 2016, she got her own TBS comedy as a pastiche parody of cop procedurals in Angie Tribeca as Angie Tribeca.

She has also starred in several films and has written comics, screenplays, columns, and songs - plus a chapter in her father's autobiography. As mentioned above, she is an acclaimed singer and musical artist, having recorded vocals for Maroon 5 and Tupac. In addition, she directed the music video for Sara Bareilles' "Brave", in the style of direct cinema.

Jones has one son with her partner, Ezra Koenig of Vampire Weekend.

Not to be confused with Rashida Jones, an executive in NBC's news division (both Rashidas having connections to NBC mixes things up more).