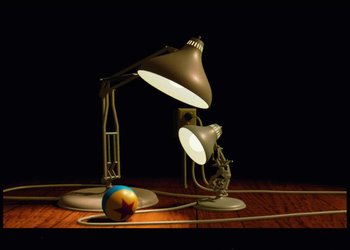 Just like EarthBound Beginnings, it all started with a lamp.
In 1986, Pixar Animation Studios produced its first film.
This is why we have a hopping lamp in our logo.
— Excerpt from the Toy Story 2 release of the short
Advertisement:

If Toy Story can be considered the Snow White and the Seven Dwarfs of CGI, then Luxo Jr. is the Steamboat Willie.note Pixar co-founder Ed Catmull even noted that the exact same number of years (nine) passed between both shorts and their respective features. A 1986 short directed by John Lasseter and the first short to be credited to Pixar (formerly Lucasfilm's Graphics Group, as they had been credited on their first short The Adventures of André & Wally B.). It premiered at that year's SIGGRAPH conference (where it received a massive standing ovation mere seconds into it) and was later released theatrically with Toy Story 2.

A desk lamp sits on a desk. A ball rolls into frame. The lamp is sentient and animate, and it has a child, in the person of another, smaller desk lamp. Luxo Sr. and its child Luxo Jr. kick the ball around a while. Luxo Jr. then jumps on the ball and starts bouncing on it—with unfortunate consequences.

Created with the intended purpose of demonstrating the utility of computers in creating animated films (something Lasseter had been fired from Disney for attempting to do just a few years prior), the success of this short and its follow up, Tin Toy, convinced Pixar to abandon the computer software business and become a full-fledged animation studio. A year later, George Lucas, satisfied with the work that the team had done for his studio and looking to sell off assets to cover the combined cost of his divorce settlement, the construction of Skywalker Ranch and the losses from Howard the Duck, sold the budding studio to Apple Computers co-founder Steve Jobs, and the rest is history.

The title character became Pixar's mascot, famously appearing in the studio's Vanity Plate where it jumps on the letter I in "Pixar" and taking its place. Both characters were also featured in a handful of Sesame Street shorts.