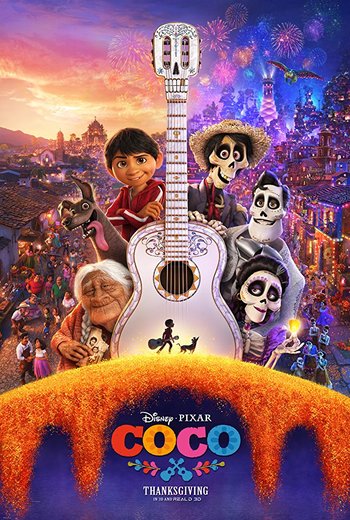 There's a bone to pick with people, in more ways than one.
"Remember me / Though I have to say goodbye, remember me!"
— Ernesto de la Cruznote actually by Héctor Rivera

Coco is Pixar's 19th feature film, directed by Lee Unkrich and released in 2017.

The film tells the story of a 12-year-old Mexican boy named Miguel Rivera who, living in a family of music-hating shoemakers, ends up creating one of the most extraordinary family reunions ever upon discovering a generation-old mystery surrounding this so-called "music curse".

It's become the number one movie of all time in Mexico, with critics and audiences alike praising it for its sensitive and artful representation of the Mexican holiday and culture.

For the first few weeks of its run* in November, meaning not counting its weeks-earlier Mexican premiere, and excluding South African prints, the Frozen short Olaf's Frozen Adventure was attached to the film's theatrical release.

Please move any character tropes to the Coco character page.

Tropes Q to Z
¡Ay mi familia! note Oh, my family ¡Oiga mi gente! note Listen, my people
Canten a coro note Sing as a chorus, let it be known
Our love for each other will live on forever
In every beat of my proud corazón!
Feedback

After somehow crossing over into the spirit realm, Miguel can see the spirits of the dead in the cemetery.

Example of:
I See Dead People

After somehow crossing over into the spirit realm, Miguel can see the spirits of the dead in the cemetery.