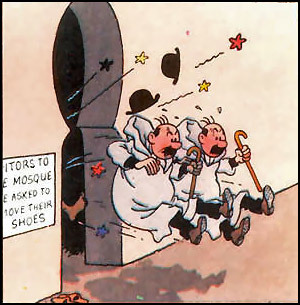 "I never want to see you again! You either!"
A sort of scene transition that usually involves a door. Usually done for laughs in animation, where the victim is lifted by the collar (and sometimes the back of his pants), taken outside and then dropped, thrown or kicked into the curb (for extra comedy, the victim can also skid along the ground or land in the garbage). Older works sometimes called this "getting the bum's rush".
Advertisement:

Can also be done for drama in live-action shows, where the victim is dragged outside by two or more people and thrown into the mud or the pouring rain, or just simply beaten up afterward. See Destination Defenestration for when a window is involved. May or may not involve Literal Ass-Kicking. Usually preceded by the person doing the tossing shouting "Get Out!"

mario typically does this to link

mario typically does this to link