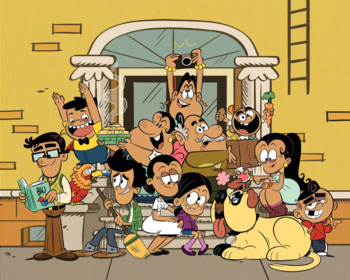 "We're Cuban. Literally everybody we know who has a baby lives with their parents."
— Victor, One Day at a Time (2017)
Advertisement:

Exactly What It Says on the Tin: When two or more adult generations share the same living unit. The quintessential example of the trope is Four Generations Under One Roof by Lao She, but many East Asian stories set before the mid-to-late 20th century feature this trope whether they make a point to or not. Very much Truth in Television in many cultures, but nowadays often played for comedic effect.