Shrine to the Fallen 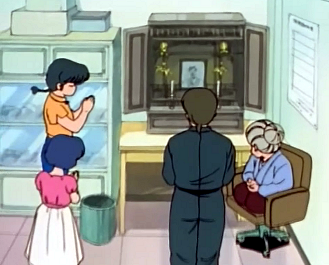 "There's a clock tower in Hereford where the names of the dead are inscribed. We try to honor their deeds, even as their faces fade from our memories. Those memories are all that's left when the bastards have taken everything else."
— Captain Price, Modern Warfare 3
Advertisement:

Whether it's your dead little brother, your child that passed on after an illness, your lost love or just that one person you couldn't save, some characters are so attached to a deceased loved one that they have a hard time letting go. A shrine to the dearly departed is often a good way to inform the viewers of this connection, especially if the shrine is to someone who kicked the bucket before the show even started. In fiction, showing a child or bereaved spouse praying at such a shrine is a visual shorthand for the Disappeared Dad or Missing Mom.

These are typically created with a photograph and a number of votive candles or incense, but traditions vary from culture to culture. In Asian cultures, shrines to the dead are a traditional part of the mourning ritual and are placed either in a prominent position in the home or, if the household is wealthy, a place can be purchased/rented at the local temple. There are even shrines for the anonymous dead or women who died unmarried (so they don't come back as a Stringy-Haired Ghost Girl).

If the circumstances of the deceased's death mean there is Not Enough to Bury, the creation of a shrine in their memory may be treated as a funeral, complete with as many of the accompanying rituals as possible and often including a Memorial Photo. In such cases, this trope overlaps with Burying a Substitute.

Compare Empty Bedroom Grieving, the main Western variant of the "shrine" where the family of a deceased person (especially parents for children) to keep the deceased's bedroom exactly how it was when they were alive]], and not using it for anything else because it would be the final admittance that the deceased is never coming back. Sometimes they will leave a chair for the deceased; this is especially noteworthy if said chair was the deceased's favorite.

Compare and contrast Stalker Shrine in which this idea takes on a much more sinister note, and Shrine to Self when you just love yourself that much. Compare The Dead Have Names, another way to commemorate the fallen, and Grave-Marking Scene, in which the deceased's final resting place is visited and treated as a shrine.

As this is a trope about deaths, there may be some spoilers.