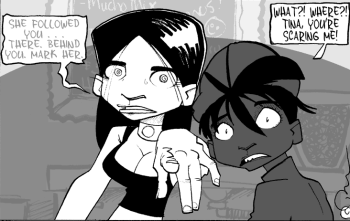 "One thing I must remember about my demons...
If I don't do exactly as they say, as they wish...
They become totally... completely... harmless."
— Monica
Advertisement:

is a "slice of supernatural life" webcomic started in 2001 by Paul Taylor, who describes it as "An attempt to combine the cute and the macabre." It follows the life of Monica Villareal, a busty anthropologist from Minneapolis, as she discovers that it isn't her that's crazy, but rather the world around her.

The comic started out as a simple slice of life comedy, but eventually grew into a much more complicated story with the introduction of an Aztec deity, three indestructible golems, and a massive, time-spanning plot to save the world. Despite the shift, it still finds time to explore the personal lives of the characters, but with a bit of a supernatural twist.

In 2013, the focus began to shift away from Monica to her friend Katherine Gilchrist and her adopted daughters, a teenage siren named Atsali and a pre-teen sentient mass of vines named Castela.