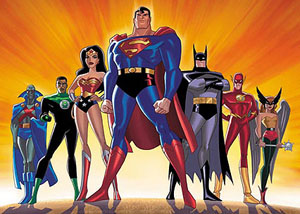 Not to be confused with the B or the Q.
"I've heard of it before, but I've never seen it! It's the Flying "V"!"
— Announcer, D2: The Mighty Ducks
Advertisement:

In almost every show featuring a team of heroes, at some point in the opening or promotional materials the main characters will be displayed in a certain formation. The leader stands in the middle of the shot, with the rest of the team standing to each side of him in order of importance, each slightly behind each other, forming a "V" shape.

Quite apart from looking really cool, this shot also has practical advantages. For one thing, it makes all the characters neatly visible, but more importantly, the viewer can and will make inferences about the group's power dynamic based on the arrangement of the characters. The characters flanking the central figure on either side will be assumed to be the two second most important team members, with others descending in importance as they move further toward the tips of the V and thus further back into the shot. (To be clear, it's not a hard and fast rule that every V formation shot will adhere to this formula, but the viewer's expectation is definitely there. The designer of the shot will have taken that expectation into account, even if they're intending to subvert it.) Also, though this is less of a given, information might be conveyed by whether a character is standing to the central figure's left or right side. The left and right sides may represent different subgroups of the team, or indeed two separate (but probably not worse than rivaling) factions altogether.

They put it on DVD boxes, magazine covers, book covers, game covers and album covers too. However, in movie covers there is a risk that the center lead will be replaced by the most famous name, whether they are the leader or not.

Most characters will pull off a Dynamic Akimbo in this shot. The moving version of this is Power Walk. Subtrope of Team Shot (also compare that trope) and Opening Credits Cast Party, where the cast poses for the cameras during the credits and the Establishing Team Shot.

After saving early humanity, the Eternals do what all heroes do: pose.

After saving early humanity, the Eternals do what all heroes do: pose.