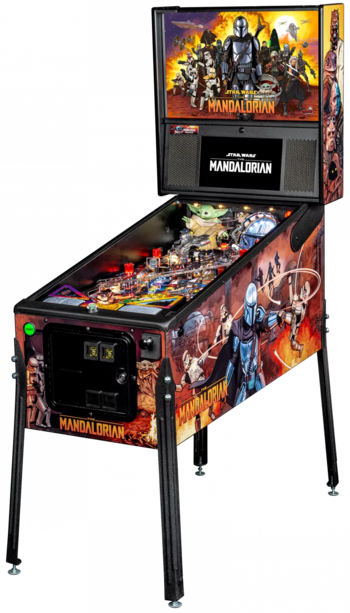 The Premium model.
The Mandalorian is a Physical Pinball Table released in mid-2021 by Stern Pinball. It was designed by Brian Eddy, with coding by Dwight Sullivan, artwork by Randy Martinez,note a longtime Lucasfilm artist who had previously illustrated the Comic Art versions of Stern's previous Star Wars game and specially-made voice work by Carl Weathers (reprising his role as Greef Karga).
Advertisement:

Based on the show of the same name, the player assumes the role of the Mandalorian himself. A bounty hunter by trade, they must play through various Missions and Encounters inspired by the series to reach "This is the Way" and get a shot at earning their signet. They can also earn Beskar by completing Missions or the timed "Scope", which can be traded in at the Foundry for armor, weaponry, and other helpful upgrades. In addition, the mysterious Child that the Mandalorian must protect stands on the playfield, able to bestow one of several different awards if the player earns them. Rounding out the key features are enemy Ambush modes and the three Razor Crest Multiballs (achieved by repeatedly hitting a shot near a small model of the namesake ship).

Notable mechanical components include a small mini-playfield patterned after the Mandalorian's helmet. On Premium and Limited Edition models, it can rotate to become vertically oriented during Encounters. Other differences between the two include a horseshoe scoop ramp and a magnet representing the Child's Force abilities.