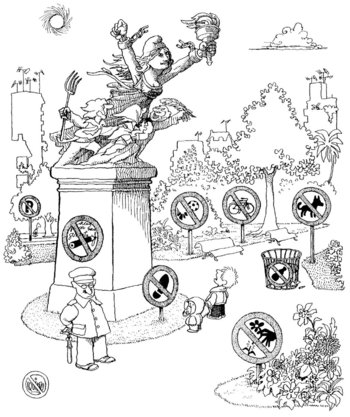 "Freedom", Public Park.
"You write "Born to Kill" on your helmet and you wear a peace button. What's that supposed to be, some kind of sick joke?!"
—Colonel to Private Joker, Full Metal Jacket
Advertisement:

A kind of visual technique, usually (though not always) played for laughs. It features two objects, people, or images in proximity to provide a contrast to one another. Frequently, it's an inanimate object, such as a sign or billboard, and something in or of the real world. While the sign is making one very clear statement, the real thing will be portraying a reality that is completely different in nature. The sign, as a result, will appear to be either surreal or completely ineffective, considering its general surroundings.

A subtrope of Mood Dissonance. Birth-Death Juxtaposition is a subtrope common enough to have its own page. When played for drama, is usually extremely bleak and depressing, and a sign of a Crapsack World. Compare Description Cut and Ad Dissonance.