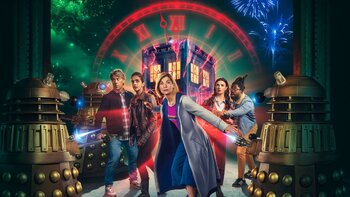 ♫ Should auld acquaintance be forgot? ♫
"Anyone else got a proper déjà vu?"
— Dan
Advertisement:

The one that's Groundhog Day... of the Daleks.

"Eve of the Daleks" is the 2022 Doctor Who holiday special, serving as the first in a trilogy of specials set after series 13 that serves as the home stretch of Jodie Whittaker's tenure. It was written by Chris Chibnall and was released on New Year's Day, 2022.

On New Year's Eve, it's business as usual for Nick and Sarah. The former is conducting his yearly visit at his personal unit at ELF storage, which is run by the latter. However, the two are interrupted by something unexpected... a time loop. As if to make things worse than it already is, it's a time loop that constantly repeats whenever they encounter and perish at the newly updated Gatling Good gunsticks of the Fell Saltshakers. Eventually, the Doctor, Yaz, and Dan also get caught in the loop, which means that the five must work together to break this cycle of repeated extermination, lest one loop be the last loop.

"Anyone else got a proper déjà vu?"
— Dan