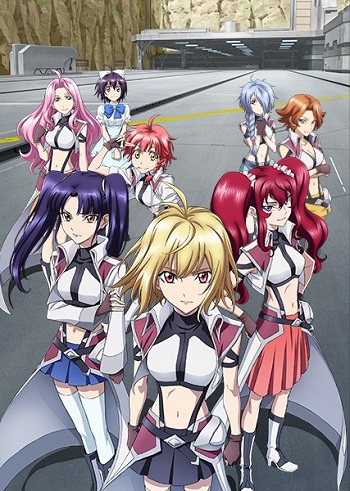 Definitely not your typical mecha or harem anime. Clockwise from right:  Chris, Rosalie, Hilda, Ange, Salia, Vivian, Ersha, and Momoka.
"The director said 'Eh? Is this really okay?', and did oppose the idea, but Higuchi-san, the producers, and I agreed on this development."
— Creative Producer Mitsuo Fukuda
Advertisement:

Cross Ange: Rondo of Angels and Dragons (Tenshi to Ryuu no Rondo) is a Sunrise original anime produced and written by Mitsuo Fukuda and directed by former Studio 4°C alumn Yoshiharu Ashino that aired as part of the Fall 2014 Anime season.

Since obtaining the information technology known as "Mana", humanity has used its near-magical power to eliminate global crises such as war, food shortages, and pollution, creating an age of peace and freedom.

Princess Angelise Ikaruga Misurugi (Nana Mizuki) is the First Princess of the Misurugi Empire, set to become the next Empress. However, during the Baptism Ritual, she is unable to use Mana. Everyone realizes that she is a Norma, a person who is unable to use Mana, and are seen by society as outcasts.

She is exiled to a remote island, where she meets a group of Norma girls who fight using humanoid machines called Para-mails. They fight against beings called DRAGONs from another dimension who have come to invade their own as Angelise prepares to get revenge on both her brother Julio (Kosuke Toriumi), the newly-crowned Emperor, and his master Embryo (Toshihiko Seki), the supreme leader and god of the world and the man who oversees the oppression of Norma, for turning her into an outcast.

The show was simulcasted in its original run by Crunchyroll; however it has since been removed from the platform. It is also licensed by Sentai Filmworks for an English-language release. The show also has a Yonkoma parody manga entitled Cross Ange: Tenshi to Ryuu no Gakuen (Cross Ange: School of Angels and Dragons) and a game by Bandai Namco and Graphinica (with assistance from Q Tec) entitled Cross Ange Rondo of Angel and Dragon Tr. with an original protagonist. The series also appears in Super Robot Wars V and Super Robot Wars X.

"The Rules Your Kind Made"

Ep. 3: "Vilkiss Awakens". Jill points out to Ange that Norma are exiled to Arzenal because people in power wanted it that way - including Ange, until she was found to be a Norma herself.

"The Rules Your Kind Made"

Ep. 3: "Vilkiss Awakens". Jill points out to Ange that Norma are exiled to Arzenal because people in power wanted it that way - including Ange, until she was found to be a Norma herself.