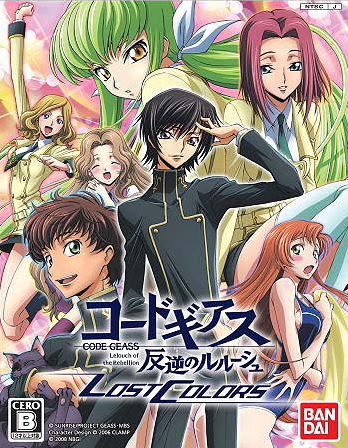 Code Geass: Lelouch of the Rebellion Lost Colors is the second video game developed about Code Geass. It was developed for the PlayStation Portable and PlayStation 2, and released in Japan on March 27, 2008. It is a visual novel game which follows a new protagonist named Rai (ライ), who suffers from amnesia. He has a Geass ability similar to Lelouch's, but activated by voice.
Advertisement:

The game begins with a mysterious young man stumbling onto the grounds of Ashford Academy and encountering members of the Student Council before collapsing. After being asleep for several days, he awakens and is met by the entire Student Council (Student Council President Milly, The Stoic Lelouch, Genki Girl Shirley, Nice Guy Suzaku, Plucky Comic Relief Rivalz, Shrinking Violets Nina and Kallen and Lelouch's younger sister the handicapped Nunnally.

Lelouch immediately demands to know who the young man is, at which point Milly scolds him for asking for someone's name before giving his own. After introductions, Lelouch again demands the young man's name, at which point the youth reveals he is suffering from memory loss. He can just barely remember his name ('Rai' by default).

Lelouch recommends calling the authorities, but Milly decides to accept Rai into Ashford Academy as a new student, allowing him to stay in the school clubhouse to boot. Lelouch is shocked at this, but Milly says she'd feel bad about just dumping someone who's so dazed and confused. Most of the Student Council backs Milly and Lelouch reluctantly backs down, knowing how stubborn Milly can be. Rai himself attempts to refuse, not wanting to be a burden, but Milly insists. Rai tries to press the issue, and in return Milly says he can pay her back by helping with the Student Council.

Thus begins Rai's life at Ashford Academy. The two versions of the game are almost identical, sharing the same four routes (the Geass Route, Brittanian Army Route, Order of the Black Knights Route and Ashford Academy Route) but also having one unique route each (the Japanese Liberation Front Route for the PSP and Blue Moon Route for the PS2). Which route Rai follows depends on which characters he interacts with the most, along with decisions he might make. For example, interacting a lot with Suzaku during the prologue eventually has Suzaku invite him to meet with the Experimental Unit, which can lead to Rai joining the Brittanian Army. On the other hand, spending time with Kallen has her decide to recruit Rai into the Order of the Black Knights.

There are also several routes available within the chosen route. For example, the Brittanian Army route can have Rai remain part of the Experimental Unit, join the Purebloods Unit led by Jeremiah Grottwield and Villetta Nu or even join Princess Cornelia's Royal Guards. For the PSP version Rai can opt to break ranks with the Black Knights and defect to the Japanese Liberation Front. The PS2 exclusive Blue Moon route can have Rai become closer to and eventually romance various characters like Nunnally, Kaguya, even Lelouch himself.

Examples common to all routes:

The Geass Route provides examples of:

Order of the Black Knights Route

The Blue Moon Route (PS2 version only) provides examples of: