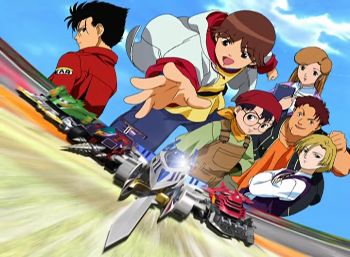 Kouya Marino is the younger brother of the deceased Crush Gear champion, who wants to follow up to his brother's legacy. Problem is, he is just one of the few members left of a Crush Gear club whose sole claim to glory is that it was once his brother's club. However, he is helped by a few friends and some Crush Gear players who defect to Kouya's team. Fighting with his brother's keepsake on his side and facing his brother's ex-teammate-turned-rival, will Kouya ever realize his ambition to become the greatest Gear Fighter in the world?

A 68-episode anime produced by Sunrise, Crush Gear Turbo seem to be a run-of-the-mill Merchandise-Driven show, involving mechanical vehicles being thrown to a ring to fight other machines called Crush Gears, which according to some detractors, looked like Beyblades on steroids. However, it boasts superb CGI fight scenes that has aged well for its genre, sheer over-the-top fight scenes that put both Beyblade and Bakusou Kyoudai! Let's & Go!! to shame, and a soundtrack helmed by none other than JAM Project. The result is a veritable mix of Hot-Blooded Shounen show with gorgeous visuals and excellent rewatch value. The anime series is not well known in US or UK, but is big in South East Asia, Australia and Germany where it was aired dubbed. The series also had a manga series, a Pragmatic Adaptation that had a similar beginning, but has a big shift in plot focus mid-way.

This series also spawned a sequel called Crush Gear Nitro, but it wasn't as popular as the original. Many blame the loss of JAM Project's catchy signature opening/ending songs and an inexplicable, more kiddy-friendly Art Shift.