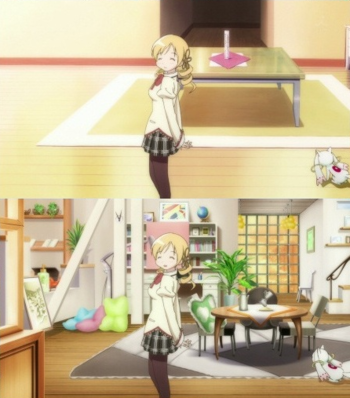 The gap between broadcast and home video gave Mami time to redecorate.
"Ah yes, the snake. One of the legendary bad effects of Doctor Who - one so bad that they redid it in CGI for the DVD. Surely by 2011, when the DVD came out, we can simply be at peace with the fact that Doctor Who had some crap effects in its time. I mean, let's CGI out Matthew Waterhouse while we’re at it."
— TARDIS Eruditorium, "Kinda"

Things take time and some companies really don't have the time to spare. TV airings can be more the beta version of the episode and fully complete on DVD and Blu-ray, or even in subsequent airings before home video copies are made (satellite/cable, online streaming, syndication, export). Sometimes this can be fixing of Off-Model shots and scenes, additional animation and special effects, or reworking of backgrounds* Though recent releases are often inconsistent with how much is changed between their original airing and home releases, and usually leaves out episodes worked on by outside animation studios brought on by the lead production company. The TV version is often never seen again; the more nostalgic viewers usually Keep Circulating the Tapes.

Primarily an Anime trope. The anime fandom has named this being "Shafted" after Studio Shaft, which uses this on nearly every show it produces.

Unrelated to Better on DVD, which is "Archive Binge enhances the series."

Compare Recut, which is the re-release special edition of this trope, and somewhat related to Updated Re-release and Polished Port for Video Games. Super-Trope to Too Hot for TV, which is this used for censoring. Compare negatively Digital Destruction.