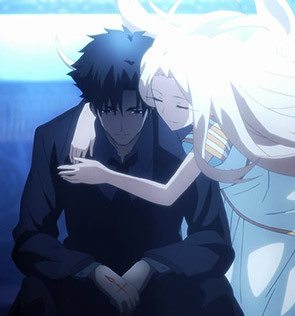 He's a notorious mercenary with a Dark and Troubled Past and whose heart is deeply wounded as a result. She's an Artificial Human with the innocence and sweetness of a child. Needless to say, they're a match made in Heaven.
"Keep your faith, raise your lively face
Just get rid of your broken wings—you're strong enough by now
I'll be your spark when you're lost in the dark
And let me be your song, be your match to
Light your heart up."
— Mako Mankanshoku's theme, "Light Your Heart Up", Kill la Kill
Advertisement:

The tendency for the brooding, angsty, loner boy to end up with a sweet, gentle girl who will patiently coax him out of his moods.

While the appeal of the brooding boy probably has something to do with All Girls Want Bad Boys, the brooding boy isn't necessarily bad, he's just… moody, troubled. At worst, he'll be an Anti-Hero who's put his bad boy past behind him or at least is trying to. Maybe he has a Dark and Troubled Past. Maybe he's a Hurting Hero. Maybe he's made terrible mistakes, and that weighs on his mind. Maybe he simply takes his responsibilities far more seriously than the rest of his teammates. Whatever the case, he's just waiting for someone to draw him out of his shell, and that person is the gentle girl.

For her part and unlike her kookier sisters (the Manic Pixie Dream Girl and Genki Girl), the gentle girl doesn't try to actively shake the brooding boy out of his moodiness. Instead, she patiently and persistently offers kind words, either shy or gentle smiles, hugs, companionship, and hope. Usually The Power of Love will eventually heal the brooding boy, and she might learn some things about herself as well, especially if she ends up facing her own demons too. She may be the Living Emotional Crutch for the guy, but it's not necessary.

Eventually, their appearance will be used to underline their personalities. She tends to be blonde, while his hair is usually dark. This dynamic can also show up in a lot of Yaoi and Yuri works. If one of the partners is really cheerful and sweet, the other partner is probably an angst-fest waiting to be unleashed.