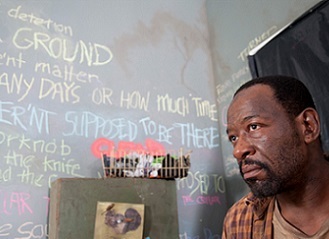 Writing's on the wall.

On a supply run, Carl and Michonne bond, while Rick encounters an old friend who's gone off the deep end.

Rick, Carl and Michonne are driving towards King County to obtain supplies and weapons. As they continue along the road, they pass a hitchhiker who frantically signals for them to stop. A few seconds later, they come upon a mass of wrecked vehicles.

As they slowly drive around the wreckage, their car becomes stuck in the mud and is quickly surrounded by walkers. Rick tells Carl and Michonne to plug their ears as he aims the gun out of the window and takes out the walkers. As they work to free the car afterwards, Carl tells his father that he's still not sure about Michonne, but Rick tells him that they can work together as she listens from the other side of the vehicle. They free the vehicle and drive off, just as the hitchhiker catches up to them.

The car pulls into the middle of town, and Rick decides to visit the police station to see if the rest of the weapons are there, only to discover the storage locker has been emptied. Rick then suggests trying different venues, and asks if Michonne has a problem. While she's not amused by his actions, she indicates she's fine with him, and hands him a single bullet she found in the locker.

As the trio moves through the town, they discover that traps have been set up throughout the street, and see a lone walker get trapped in wiring. Suddenly, an armed man appears on the roof of a nearby building and orders the three of them to drop their weapons. Rick shoots and the trio scatters as the man on the building returns fire. Out of ammunition, Rick hides behind a vehicle as the man comes down to the street and approaches. Suddenly, Carl pops out and shoots the man in the chest, knocking him unconscious. As the group examines the body, they discover he's wearing body armor, then pulls off his helmet to reveal... Morgan, the man Rick left when he first set out to find his family.

The group moves to carry Morgan back into the building, only to discover he's set down even more traps. They bring Morgan upstairs and set him down in his apartment while they look on in awe. The apartment is filled with many different types of guns, along with scrawled notes on the wall. Carl and Michonne pack up several guns, while Rick discovers the walkie talkie he left with Morgan when he first set out to find his family. He also discovers a message on the wall that reads "DUANE TURNED". Carl then discovers a map with a message showing that the Grimes home burnt down.

Carl sets out to find a baby crib from a nearby store, though not before Rick tells Michonne to go with him. Carl tries to ditch her, but soon discovers that she won't leave easily, and tells her they have to get something else first.

Back in the apartment, Rick says that he's sorry for what happened to Morgan, while the latter wakes up and produces a hidden knife. He suddenly lunges at Rick, and the two fight until Rick exclaims that Morgan knew him. Morgan responds by stabbing Rick in the shoulder, and when the latter pulls a gun on him, begs to be put out of his misery. Rick asks Morgan to remember why he didn't answer the walkie-talkie, and Morgan says that although he tried several times, he could never hear Rick.

Rick then relates his experiences over the past year to Morgan, and asked him what happened with the latter's wife. Morgan explains that he couldn't kill her, and later she attacked Duane, which prompted him to put her down for good. Duane succumbed to his injuries afterwards.

Meanwhile, Carl and Michonne make their way to a diner which is infested with walkers. Carl wants to go in alone, but Michonne states that he can't stop her from helping. Together, they use several of Morgan's rat cage traps to draw the walkers away, while Carl takes a framed photo from inside. However, the walkers make their way back in, and the duo is forced to make a break for it, but not before Carl drops the photo. Outside, Carl insists on going back in, but Michonne tells him to wait and goes around to the back of the diner. She emerges a few seconds later with the photo and a statue of a cat, which she liked the look of. Carl is happy to have the photo, which is a framed picture of his family.

Rick asks Morgan to join them at the prison, but Morgan realizes that Rick is facing a far greater threat, and responds that he doesn't want to be there to face whatever Rick is fighting.

Carl and Michonne return to the apartment with the framed photo and a crib, and Carl apologizes to Morgan for shooting him. Afterwards, he tells his father that Michonne's a valuable member of the team. The three of them load guns and ammunition into the back of their car, while Michonne admits to Rick that she has also experienced hallucinations of her dead boyfriend.

As they leave, they see Morgan continuing to dispose of the walkers. As they continue driving down the road, they pass the body of the hitchhiker, who was eaten by the walkers. The car stops, backs up and the door opens to open the hitchhiker's backpack, just before they drive off again...