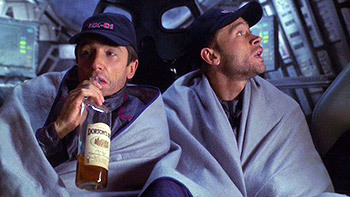 One shuttlepod, two characters, and a bottle.
"I hate bottle episodes. They're wall-to-wall facial expressions and emotional nuance. I might as well sit in the corner with a bucket on my head."
— Abed, Community, "Cooperative Calligraphy" (the series's bottle episode)
Advertisement:

A "bottle episode" is designed to take up as little money as possible.

The easiest way to go about this is to use only the regular cast (or even just part of the regular cast) and set it in a single location, especially if you have a main standing set. This keeps production costs down, because no-one needs to scout locations, build new sets, or create fancy CGI graphics of the outside of the spaceship. Bottle episodes are often a chance for a slow, characterization-filled episode before/after a big special-effects-laden action episode. Of course, all this doesn't mean the episode will be cheap, just that it's meant to be; like any regular episode, unforeseen complications can cause the show to run over the scheduled budget.

The term has become synonymous with "single-location" episode, even though bottle episodes can (theoretically) have as many locations as a normal episode. All that matters is that it costs less, because the money is having to pass through a "bottleneck". The Star Trek cast and crew call this a "ship-in-a-bottle" episode, which is where the name originated. Sometimes single-location episodes are written as a Self-Imposed Challenge by the writers, and might ironically cost more than a standard episode if the one location is new and/or elaborate.

Bottle episodes often place a higher burden on the writers than a normal episode. Due to limitations in locations and cast, the writers have to lean heavily on inventive situations and dialogue to carry the show. Depending on the writer and how well the premise works out, bottle episodes can range from terrible to some of the best-received.

One advantage of a bottle episode is that it comes equipped with its own reason for why the characters need to stay together and communicate, an essential part of screenwriting.

Some plots lend themselves to the nature of a Bottle Episode, such as Sinking Ship Scenario, "Groundhog Day" Loop, Locked in a Room, or Episode on a Plane. Sometimes an episode which is a Period Piece may look fancy and expensive, but these are often using the studio's already-existing (thus free) costumes and sets. "Die Hard" on an X, though limiting the episode to one location, rarely fits this trope, since the other elements of that trope often negate the budget-saving aspects of a Bottle Episode. Also, a bottle episode may or may not involve a Minimalist Cast. Can overlap with Patience Plot.

Almost all Clip Shows (and, by extension, Recap Episodes) fit this trope, despite not strictly being an actual Bottle Episode. Not to be confused with Drowning My Sorrows, nor with sending out messages in bottles. Another cause that happens on occasion is a writers' strike. With the shorter formats, such as half-hour TV series, the temptation for the director is sometimes to make it The Oner as well.

Single Locations plots are very popular in theater, allowing theater troupes with no budget to focus on their performance without set designers or techies to create effects or move set pieces around.

The scene of the page quote

The scene of the page quote