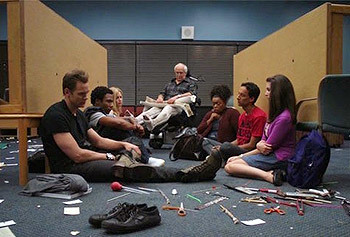 The study group has finished an assignment for their anthropology class and everyone is getting ready to go their separate ways. Jeff has a date, Britta has a photography project, and the rest are going to a puppy parade on the quad. Then, Annie notices that her pen is missing. Hilarity Ensues as each member of the group is successively accused of having taken the pen and the group starts to turn on each other.