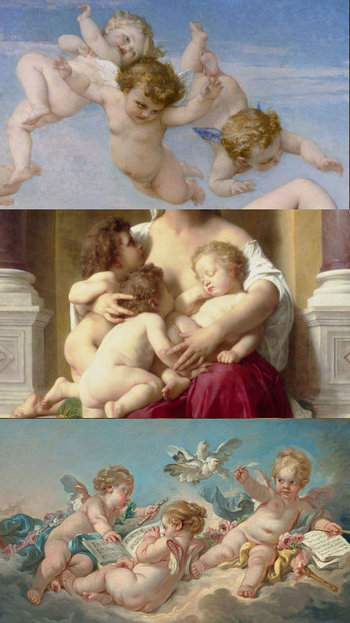 The putto (known in plural as putti) is a figure in a work of art depicted as a chubby male child, usually naked and sometimes winged. Coming from the Italian word for the Latin word putus, or "boy" or "child", the putto was originally characterized as being metaphorical agents of fate, affecting human events invisible to those under their influence.

With artistic masters bringing back Greek and Roman imagery in The Renaissance, the putti would find a revival in paintings and sculptures, Christianity adopting the winged putto as a cherub, a type of angel of Abrahamic religions, and non-winged examples associated with the Baby Jesus.

More often than not, the winged putti are portrayed as a Cherubic Choir, flying en masse so that they could sing and play and be cute. Long after the Renaissance, modern pop culture often likes to portray the Roman god of love and desire Cupid as a winged putto, doing away with his association with sexuality in favor of a more chaste, innocent form of love. Because of this putti can sometimes be seen wielding a Sacred Bow shooting Cupid's Arrow.

For an Evil Counterpart for the putto, see Enfant Terrible and Fallen Cupid. See also Babies Make Everything Better.

Not to be confused with Filipino rice cakes

or the Spanish word for a male prostitute, which are written with one T instead of two.