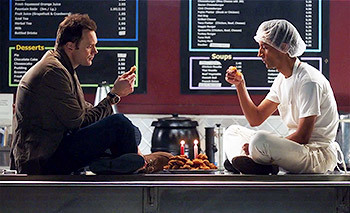 "As far back as I could remember, I always wanted to be in a Mafia movie."
— Abed
Advertisement:

The most popular — and only edible — food in the Greendale campus cafeteria is the fried chicken fingers. Unfortunately, this means they're also frequently sold out before our heroes can get any to eat, and it doesn't help that Starburns, the cafeteria fry-cook, always holds some back to give to his friends to try to increase his popularity. Jeff has decided that this is unacceptable, and convinces his friends to help him get Starburns fired and Abed hired as his replacement in order to make sure they get some.

Abed, however, has decided to view this scheme through the lens of a mafia movie, and is soon the mastermind of an underground network of chicken finger smuggling, elevating the social status of the study group as everyone desperately tries to curry favor in order to secure the precious food. However, this means that Jeff is gradually becoming dislodged from his position as group leader, and as the other members of the group become increasingly spoiled and arrogant with their newfound status it increasingly looks like the higher they rise, the harder the inevitable fall will be...