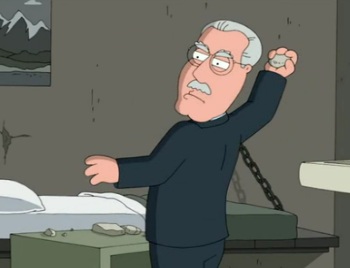 "I'm so angry I could just throw a rock
at that poster of David Cassidy!"
"Sometimes there are just not enough rocks."
— Forrest Gump, Forrest Gump
Advertisement:

Basically, this is when enraged characters start throwing objects around to express their frustration. They're throwing a tantrum, and throwing objects in the process. Normally, this is done by very young children who are angry, though sufficiently angered grown teenagers and adults have also been known to do this, usually during an Anger Montage along with a good bout of Percussive Therapy.

Not to be confused with just being about tantrums in general; the title is a pun.

Mulder wants answers and the truth to every conceivable X-File. But he can't handle the truth.

Mulder wants answers and the truth to every conceivable X-File. But he can't handle the truth.