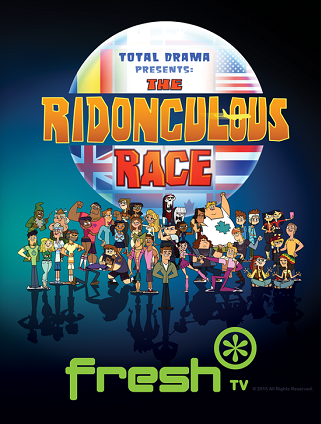 Welcome to the Ridonculous Race!
Advertisement:

Total Drama Presents: The Ridonculous Race (also known as Total Drama: Ridonculous Race, or simply The Ridonculous Race) was a Canadian animated series and a spin-off of Total Drama, as well as the second series created as part of the overall franchise. The series was created by Fresh TV and aired on Cartoon Network in both the United States and Canada.note It is the only entry in the Total Drama series to have never aired on the franchise's original channel of Teletoon in English, despite the fact Teletoon funded its production. It premiered first in the United States on September 7, 2015 and began airing in Canada on January 4, 2016. It featured a return to form with 26 episodes in its debut season rather than the 13 that had been used for later Total Drama seasons.

Like Total Drama, the series is an animated parody of reality television, in this case The Amazing Race. It features a completely new host and 32 new contestants (as well as 4 returning contestants from the parent show) competing in 18 teams of two. These teams must race to different locations around the world and strive to arrive first at the "chill zone" in each locale, completing challenges before stepping foot on the "carpet of completion" at the end of each leg of the race to win prizes and to avoid coming in last, which carries the possibility of elimination or a significant disadvantage in the following leg. The teams are gradually whittled down this way until the final where the last pair goes head-to-head in the final leg of the race with whoever crosses the finish line first winning C$1,000,000.

Ridonculous Race was well received by critics and audiences with many fans seeing it as a return to grace after several lackluster seasons of its parent series (that said, a vocal minority would say otherwise). However, it was confirmed in late September 2018 by Fresh TV co-president and co-creator of the Total Drama franchise, Tom McGillis, that there are currently no plans to continue this series or the original, claiming it to be due to fleeting demographics and the concept of spoofing reality TV no longer being marketable. Thus, making it the last competition based installment in the franchise as of 2015, as well as Fresh TV's second animated series, or third counting the U.S. version of Stōked, to become a one-off, after Grojband. However, with the 2021 announcement of 2 new seasons of the original Total Drama coming to Cartoon Network and HBO Max, the possibility of continuation has now opened up.