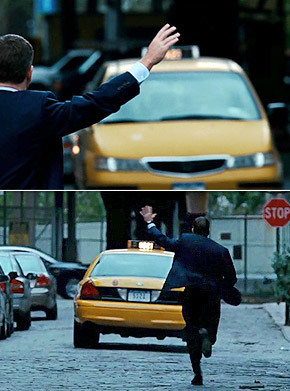 "In L.A. if you want a taxi, you pick up the phone, call for one and it comes to your house. In New York, you go out into the street and get in a fistfight for one."
— Shannon Tweed, Gene Simmons Family Jewels
Advertisement:

A character, on a city street, is trying to hail a cab. No matter how many times they yell, "Hey, taxi!", nothing stops for them.

This can be played for comedy, such as trying to show a country-bumpkin just how tough the big city can be. Or it can be played for a drama. One simple and frequent plot is when the lack of a taxi will slow the hero down in their quest. Another is if there's a sinister reason no taxi will stop for the protagonist in particular, often demonstrated by showing one that just ignored them stopping for somebody more "suitable;" for instance, the inability of a black man to catch a taxi is a too-frequent Real Life occurrence that fiction often comments on.

Kermit & Fozzie attempt and fail to hail a taxi. Luckily Gonzo manages to help them with a...odd strategy.

Kermit & Fozzie attempt and fail to hail a taxi. Luckily Gonzo manages to help them with a...odd strategy.