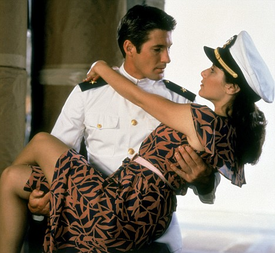 "Can we not tell anyone you just carried me in your arms like a baby?"
— Lucifer Morningstar, Lucifer (2016)
Advertisement:

A man carries a woman in his arms — one arm under her legs and the other supporting her back like a groom carrying his bride. It usually denotes or foreshadows a romantic relationship between the characters or a major difference in their physical strength or both. It's also called a "princess carry".

Variations of this trope are common and include:

When the participants aren't romantically involved, expect fans to cite this as "proof" that they really are.

If the person being held is injured, dead, or dying, it may cross over into Pietà Plagiarism. Usually, coexists with rescue tropes like Rescue Romance and Embarrassing Rescue. See also Security Cling. Contrast Over-the-Shoulder Carry and Effortless Amazonian Lift; the Touch of the Monster variant Rape of the Sabine Women visually evokes this with a monster or villain carrying an unconscious or struggling victim. In cases where one person is carrying another away from danger, this may overlap with Crisis Catch And Carry.

Not to be confused with Tribal Carry.