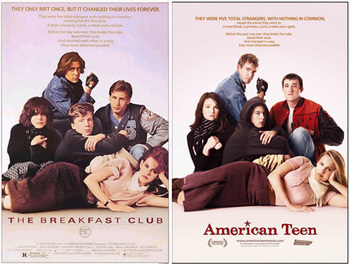 John Hughes's The Breakfast Club was one of the biggest hits of The '80s and helped codify the modern teen movie. It's no wonder that many works like to reference it by invoking the film's iconic poster

◊, either within the work itself or as part of its advertising.

Indications that the poster is being referenced include:

The poster is frequently homaged for a number of reasons. The work could be about teens or other young people (as the The Texas Chainsaw Massacre 2 poster proves, however, this is not a requirement.) Maybe it's about disparate individuals who come together. The work may be doing a throwback to The '80s and taking cues from well-known works of the time, or deliberately referencing the film in its premise.