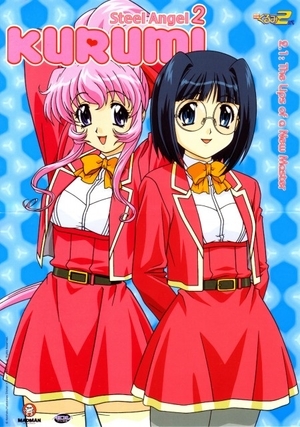 Steel Angel Kurumi 2 is an anime series produced by OLM, Inc. and directed by Naohito Takahashi. It aired from April 12 to June 28, 2001.

75 years after the events of the original Steel Angel Kurumi, Nako Kagura, a 14-year-old girl who is in the last year of middle school, is both a shrine maiden at the temple where she lives with her mother, Misaki, and an aspiring cellist.

Her best friend is Uruka Sumeragi, a rich girl who lives in the Big Fancy House next door. She is 15 years old and a high school student. Their relationship is complicated: although they have been friends since they were toddlers, Uruka has recently taken to inflicting casual minor cruelties on Nako. However, this is a smokescreen because Uruka is secretly in love with Nako.

Before Uruka can even figure out how to express her feelings, though, Nako discovers and accidentally activates Kurumi Mark II, a new Steel Angel modeled after the original Kurumi. Kurumi II, like her predecessor, is uninhibitedly affectionate with her new master. This upsets Uruka, who sees Kurumi as usurping her rightful place at Nako's side.

The series is available in North America via ADV Films.