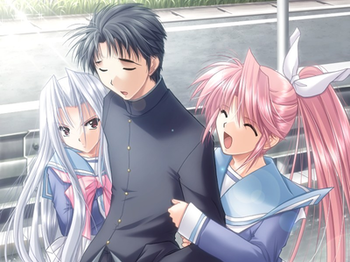 It ain't over for him yet.
Ned: Missy, we need to talk. I've found someone else.
Missy: You're so cute when you say things that you know will get you and whoever you're talking about seriously injured.
— Ned's Declassified School Survival Guide
Advertisement:

She's often cute, sometimes to the point of twee. She's affectionate, too but she also has a grip like a hydraulic press, and seems to want to be an article of clothing wrapped around the body of the guy she likes. Woe to him if he so much as looks at another girl (or if another girl dares to look at him), for she's usually armed with an Armor-Piercing Slap, a Megaton Punch or a Hyperspace Mallet, and she's willing to use it on him whether he invited the attention or not. Sometimes, even other girls are not safe from her, especially if they try to woo her crush in front of her. She's the Clingy Jealous Girl, and she can be anywhere on the spectrum from a fondly-regarded nuisance to a psycho stalker.

If she's a Yandere, she'll snap and try to Murder the Hypotenuse at least once. Especially If I Can't Have You…. If she's a Tsundere instead, her violence towards the male lead will be a Running Gag. If she has a Sugar-and-Ice Personality, she'll be more prone to snide comments and verbal violence than open clinginess. Depending on how possessive she is, their "boyfriend's" friends will also be targeted. Put them in a horror movie, and you've possibly got a Nigh-Invulnerable antagonist hellbent on having one of the characters all to themselves for whatever reason they desire.

This can even happen non-romantically. A little sister who adores her older brother may declare her brother off limits to any girl who shows interest in him, jealous of them taking his attention off her.

Expect her to be the victim of lots of fan bashing for getting in between The Protagonist and his True Love, even if she actually loses. If she does manage to start a relationship with her object of affections, it will range anywhere from annoying gushing, All Take and No Give, or even Love Martyrdom. At the same time, most of the main characters will have a similar character, since this is the simplest way to depict her jealousy and interest in the character.

In Fan Fiction, when a Relationship Sue appears to snatch the love interest's attention away, all possible love rivals will often become Clingy Jealous Girls to make her look better than she really is.

Her Spear Counterpart is the Crazy Jealous Guy.