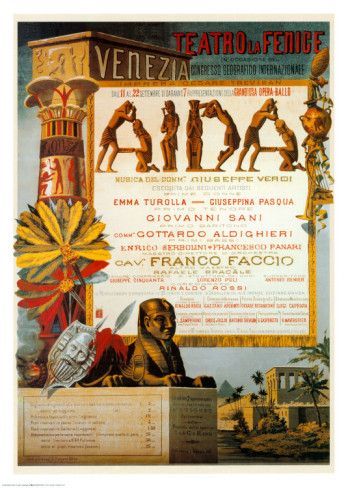 A vintage poster for a performance at the Teatro la Fenice.
Advertisement:

Aida is a four-act opera by Giuseppe Verdi, with a libretto by Antonio Ghislanzoni. Set in Ancient Egypt and known for being a grand spectacle, it's since become a popular staple of the operatic canon and receives performances every year around the world.

Radames, an officer in the Egyptian army, wants to become the commander of the invasion of Nubia, so that he may request to marry his beloved Aida, a slave of the pharaoh's daughter Amneris. He doesn't know that Amneris is in love with him, or that Aida is the daughter of the Ethiopian king. Suspecting something between them, Amneris deceives Aida into revealing her love for Radames by claiming he died in the campaign against Ethiopia. Radames gets his wish and defeats Ethiopia, bringing in many hostages, including Aida's father. Seeing Aida's anguish, Radames uses up his one wish from the pharaoh to free the Ethiopian slaves instead of asking for Aida's hand, and the pharaoh publicly engages him to Amneris.

While attempting to meet Radames at a temple before the wedding proceeds, Aida is blackmailed by her father to get Radames to reveal where the Egyptian army will be passing through on its way to defeat the rebelling Ethiopians. Aida convinces Radames to run away with her and he tells her the secret of the army's route. Aida's father chooses that moment to spring out of the bushes, announce that that's where they'll attack the Egyptians and reveal to Radames exactly who he is. Horrified, Radames refuses the chance to rule Nubia with Aida and surrenders to Amneris and the priests, who catch him as Aida and her father flee. He is condemned to be Buried Alive, but Aida sneaks into his tomb before it gets sealed, since she cannot choose between her love and her homeland. The curtain falls as she dies in Radames' arms.

Aida was commissioned by Isma'il Pasha, the Khedive of Egypt, to celebrate the opening of the Khedivial Opera House in Cairo (now the Cairo Opera House). However, the premiere ended up delayed due to the Siege of Paris during the ongoing Franco-Prussian War, as the scenery and costumes were stuck in the French capital. Instead, Verdi's Rigoletto was performed on November 1st, 1869. Aida would have its premiere on December 24th, 1871, and since then, it has become one of the most popular operas around the world.

Not to be confused with Elton John and Tim Rice's Broadway musical of the same name, although the opera did serve as the musical's inspiration.