Recap / Big Finish Doctor Who 064 The Next Life 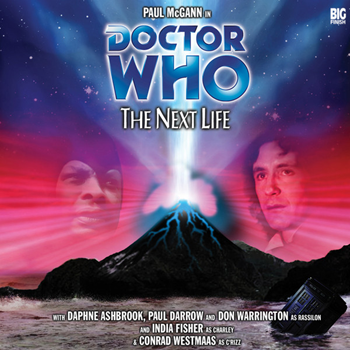 Otherwise known as the Continuity Cavalcade of Rassilon.

This episode marks the end of the Divergent Universe arc, as well as the end of the Zagreus arc. Released in December of 2004, it was also the very last episode in which Paul McGann was the incumbent Doctor — between this and his next episode, the series would return and introduce Christopher Eccleston his successor.

One day, the Eighth Doctor is stranded on a little blue planetoid in space, made of water and inhabited by savages. The TARDIS is nowhere to be found.

Charley and C'rizz were taken away from him by Rassilon and hooked up to dream machines. With the help of the Kro'ka, who has been working for him all along, Rassilon makes them re-live their worst nightmares. For Charley, it's the guilt of having deprived Simon of his income on the R101, the Survivor Guilt over watching Rathbone die, and the pain at the realisation that she can never see her mother again. She's smart enough to know that it's all fake, though, especially once Simon starts referencing Peter Davison's character from her previous dreamscapes. She tells the Kro'ka to release her from the dream.

C'rizz isn't quite so strong, and his dream of being reunited with L'da and reliving the day of his wedding almost breaks him. It's revealed that his church, the Foundation, is a cult more than anything. And that it revolves around saving people by killing them. And that C'rizz was once a very, very adept assassin. He's lost that part of his identity now, because his race doesn't just change their skin color automatically — they also adjust their personality to whomever they live with. Slowly but steadily, C'rizz has become a perfect companion to the Doctor and Charley, at the cost of the previous personality that was imprinted on him.

When they wake up (with C'rizz very shaken by the experience), Rassilon tells them both that the Doctor has been keeping a secret from them. Zagreus isn't inside the Doctor anymore. And without Zagreus lingering inside his mind, the Doctor is now free to go home, and Rassilon isn't at all sure that Charley and C'rizz would be welcome on that journey. Charley tells Rassilon to stuff it, and they enter the blue planetoid to go look for the Doctor.

The Doctor, meanwhile, meets three people on the planetoid: Guidance, the leader of the Foundation cult; Keep, an inexplicably French Great White Hunter; and Keep's wife, Perfection, who's played by Daphne freaking Ashbrook! Perfection is pretty tired of her idiotic husband, and decides to get the Doctor out of his shirt and into her bed instead. The Doctor's a bit confused, especially when a little savage girl is accidentally killed and he and Perfection find themselves hunted as the most dangerous game.

Charley meets Keep, who takes her out on said hunt, and she wonders why he speaks French and why nothing on the planetoid makes any kind of sense. C'rizz meets Guidance... his father. He has a proper Heroic BSoD when it's revealed that the island contains the Foundation itself. It's a simple little hole in the ground with a cover on it. The key to it is C'rizz' necklace. All his travels, Guidance says, all his adventures, were simply a way to guide him to the island as a vessel for the key. Nothing else mattered.

When Rassilon created the Divergent universe in a Möbius time loop, the blue planetoid started creating life, then destroying it once the cycle was at its end, then creating it anew. The Divergence started experiments to avoid the loop, but they never could break through it. Over and over again, the cycle of reincarnation would overwrite all life and all experience. Not just briefly, like in Light City, or for a single war, as seen in "The Last", but for the entire nine galaxies of the Divergent universe. When the Doctor entered the Divergent universe, the Divergence saw him as a way to break the cycle, and trapped him in Scherzo — and all subsequent experiments — to study him. From his data, they created the perfect creature: the woman named Perfection. But Perfection escaped and married Keep for his money, and Keep subsequently took control of the cult of the Foundation.

Keep turns out to be much more than he seems, as well. Specifically, he's the food from the very first experiment. He followed the Doctor and Charley out of Scherzo and into the rest of the planet, always changing, evolving, and eventually becoming a vessel for all of the Divergence. He's the entire Divergent race, plus the Doctor's consciousness, plus Charley's memories, all rolled into one. And he's angry.

"The Foundation" was a bit of a misnomer all along. It's not a "Foundation"... it's the Foundry of Rassilon. And when the planets align, when the end of the time cycle approaches, Rassilon can use it to escape from the Divergent universe. The entire cult of the Foundation was just a story to get Guidance to the Foundry with the key. Guidance was as much used as C'rizz was. C'rizz, meanwhile, is completely broken and just about ready to shoot the Doctor if it means he can re-live the cycle of his own life and meet L'da again.

And Perfection tells the Doctor that she'd love to repopulate the universe together with him. They could be fantastic together. Two perfect beings. "Adam and Eve." Her brains and his beauty. The Doctor, quite scared now, asks her to stop flirting and, more importantly, how she could possibly know about the story of Adam and Eve. Things start to make a little more sense when it turns out Rassilon was telling the truth. Zagreus left the Doctor's mind a long time ago. And Perfection committed suicide a long time ago, no longer able to bear the way that Keep abused her. The woman who claims to be Perfection is Zagreus.

Rassilon is more than a bit pleased with how everything is working out. Until Keep tells him that they've been through all this 83 times already. For 83 time cycles, each lasting years and years, Rassilon would start the cult of the Foundation, Guidance and some broken Foundation child would end up on the blue planetoid with the key, and everything would be reset at the end anyway because Failure Is the Only Option. Until now. Because this time, Keep and his Divergent consciousness have copied the mind of the Doctor into themselves. And they have a TARDIS. They can escape when the end of the cycle is reached, and Rassilon will be left in the newly reset universe, with his memories intact as punishment for his deeds.

Zagreus dives into the TARDIS and tries to pilot it to the main universe. She's a little bit surprised when she realises she's Failed a Spot Check: it's not the TARDIS at all, but Keep, who traps her inside himself. The actual TARDIS is standing a few feet away.

The Doctor sees this as an opportunity to escape the Divergent universe and start his life anew. But before he does, he needs Charley and C'rizz to make a pact with him. No jealousy, no drama, no yearnings (Charley blushes a bit). C'rizz needs to develop his own personality and repent for his Face–Heel Turn. Charley needs to stop her You Are Worth Hell attitude and accept that their friendship is more important than anything. With seconds to spare, they pilot the TARDIS out of the Divergent universe forever.

The world is reset. Rassilon and the Kro'ka find themselves trapped in Scherzo, surrounded by the piercing hellish screech and helplessly re-enacting the Doctor's and Charley's dialogue for all eternity. Zagreus and the Divergence consciousness of Keep decide to set aside their differences and start a little Adam and Eve Plot of their own. The Doctor, Charley and C'rizz open the TARDIS doors to find the good old universe waiting for them, as well as an entire army of Daleks and one very surprised Davros.