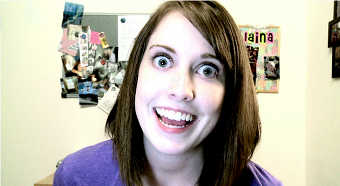 ♪I'll always be, checking up on you ♪
Advertisement:

Laina Morris (born June 22, 1991) is a YouTube parody singer and blogger, best known for her persona as the Overly Attached Girlfriend. She first gained prominence in 2012 with her parody of Justin Bieber's song Boyfriend, where she rewrote to the lyrics to be about an obsessive girlfriend who obsessively hunts her "boyfriend". Her fame skyrocketed, and she followed her viral hit with parodies to other Bieber songs, Taylor Swift songs, sketches with other original characters, and raising awareness for her local charity camp.

her retirement from YouTube, citing her own mental health struggles and encouraging viewers to be unashamed about seeking help.