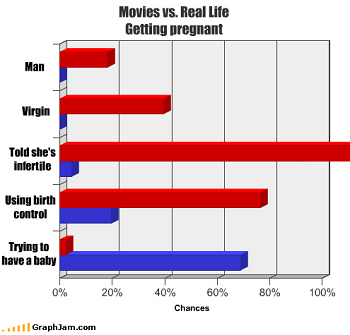 The fertility of a couple is inversely proportional to their desire to have a child.

The Rule of Drama, as applied to parenthood. Couples who want to have children will have trouble not only conceiving, but adopting and using surrogates as well. People who don't want children, however, will be faced with unwanted pregnancies even if they used birth control, particularly if the conception was forced upon them. In fact, the page image leaves out rape, which is about 200% (that's right, you'll probably have twins). Teenagers, of course, will get pregnant their first time, double points if they thought they couldn't. The reason for this, of course, is obvious: "woman becomes pregnant with longed-for child immediately" and "woman doesn't want to get pregnant and doesn't" don't exactly make the most thrilling plotlines. At least the woman with a baby she doesn't want can give it up to the woman who is desperate to conceive—but, expect much angst along the way.

If it's the man who was reliably told he was infertile, expect Mama's Baby, Papa's Maybe to rear its head; to maximize the drama, usually the woman knows he's the father.

In many cases the stress of trying to have a baby will suppress fertility, and, once the couple decides to adopt or give up, the stress disappears, and: hooplah! They have a baby! Sometimes it's after they went through the hassle of adopting, as if Mother Nature felt humorous one day.

Conversely, if an unexpectedly expecting woman starts warming up to the idea of being a mother, her chances of a Convenient Miscarriage or Tragic Stillbirth double. Or it'll turn out that she was never pregnant in the first place. This particular trick is common on shows where Status Quo Is God and having a baby would spoil everything; whether the former or latter version is used depends on how much drama the writers wish to evoke. Even that much is assuming they let things get that far; some kind of pre-existing condition getting in the way of conception can be milked for Angst as much as they want.

If, against the odds, a couple who genuinely want a baby manage to get pregnant without complications, don't expect both parents to live to see it.

One limited case where a woman who wants to get pregnant can do so — after one night, even — is if she is sneaking into the man's bed with a Bed Trick because she is his wife. This may be because the man does not want her to become pregnant; it is often the condition he set on accepting her as his wife.

This trope is very old; involuntary infertility is found in the opening of a number of Fairy Tales before the birth of the main character, and just about required for the Wonder Child. Note that this law gets revoked during the Dénouement for Babies Ever After. In The Bible, the fertility of the couple is inversely proportionate to the eventual significance of the child to God's Big Plan.

Compare Law of Inverse Paternity and One-Night-Stand Pregnancy. Distinct from (though an accurate statement of) the Immortal Procreation Clause.