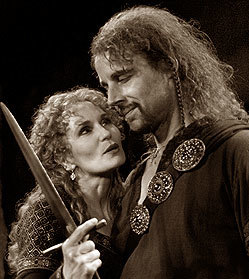 The couple that slays together...
"She'd be back. And she wouldn't burden herself with a husband this time either. Weak! He was the worst of them all, with no courage in him to be as bad as he knew he was, inside."
— Lady Felmet, Wyrd Sisters
Advertisement:

Nagging spouse of the Big Bad does not even begin to describe this woman. She is frequently even crazier than her husband and is often The Sociopath. Not only is she supportive of his ambitions, but she helps him to achieve them. She might even turn out to be the leading force behind his evil.

Whether it's lying to cops, disposing of a body, or helping her man overcome any uncertainty about carrying out his Evil Plan, she'll do it. She might even push him to do it. She'll take charge if she has to. In fact, she may turn to be such a good villain in her own right that the audience will wonder, "Why is she with this guy? She could have just done X by herself!" In the end, this usually is not the case. If she doesn't get herself killed (or outright kill herself out of guilt like her namesake), it is inevitable that something will happen to her so that she can no longer upstage her husband.

In more modern works, however, it is becoming more frequent for her to kill him once he outlives his usefulness and take the reins herself. Or if he expires some other way, she'll make the most of his death and either become the new Big Bad or make it clear that she has been the main villain all along. This is especially common if The Hero is a woman as well, to have the Designated Girl Fight at the climax.

The real Lady Macbeth was probably nothing like this, but historical records are few. The only things we absolutely know about her is that her name was Gruoch, Macbeth was her second husband, and she had one son from her first marriage. We do know that she didn't nag him into killing a wise old king in his sleep, though; the real Duncan was younger than Macbeth and a worthless wastrel, and Macbeth killed him in a fair fight in battle.

Compare The Man Behind the Man (or the Woman, as the case may be), My Beloved Smother (when it's the villain's mother who's calling the shots), Evil Chancellor, God Save Us from the Queen!, Dark Mistress (where the relationship is less equal), and Unholy Matrimony. If she's particularly ambitious and her husband is particularly weak-willed, he could be a Puppet King. A subtrope of Vicariously Ambitious.