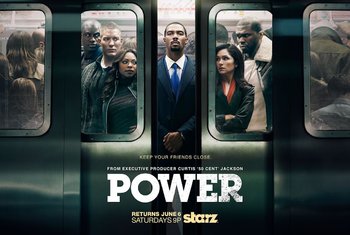 "They say this is a big rich town
I just came from the poorest part
Bright lights, city life, I gotta make it"
- Theme Song by 50 Cent featuring Joe

Power is an American drama series airing on Starz, created by Courtney Kemp Agboh and produced by rapper 50 Cent, who also has a supporting role.

The series focuses on James "Ghost" St. Patrick (Omari Hardwick), owner of Truth, the hottest new nightclub in New York, and major player in the NYC drug trade. Ghost sees Truth as his retirement plan; a way out of the game and into legitimacy, but must face struggles as his drug business comes under attack from rivals and the law. Meanwhile, his personal life is no less a struggle; his wife, Tasha (Naturi Naughton) and best friend and partner Tommy (Joseph Sikora) both try and drag him in deeper into the drug business.

Further complicating matters is the reunion between Ghost and his highschool sweetheart, Angie (Lela Loren), the woman who he never fell out of love with, and - unbeknownst to Ghost - one of the lead prosecutors trying to bring down his drug empire.

No relation to the 1998 Linda Hogan novel.