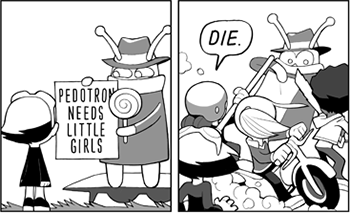 "People think it's open season on kids right now."
— This is Wonderland
Advertisement:

Nothing better to whip up some outrage in your story than making the bad guy a child molester. More cynical works about this trope will often note that getting people whipped up into a mob-frenzy — over any subject, but particularly one as emotive and genuinely shocking as this — can be a very good way to distract and manipulate them.