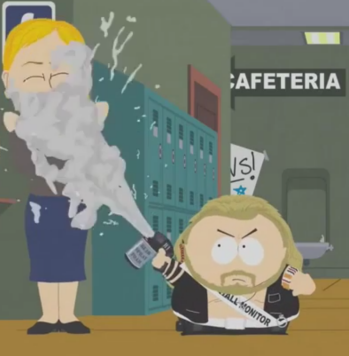 Perhaps it's because schools on TV are constantly forced to deal with teacher shortages. Perhaps it's just an excuse for writers to use all of those police tropes. For whatever reason, one position of responsibility seems to crop up time and time again in school-based shows... the position of hall monitor. These kid cops are given as much powers as teachers... they're allowed to stop their fellow classmates, interrogate them, demand hall passes, and in some extreme cases, even allowed to assign detentions. They've been given the Yellow Sash of Power.

The trope can take several forms. Sometimes, a character who is aware of all the power the position carries desperately wants to be hall monitor, in other cases, a character who worried about all the power going to his head will be very reluctant to put on the sash. Usually, the latter are the ones who receive the sash, and they're always the ones who let it all go to their head.

Normally this trope is used to teach a lesson about how someone must be careful not to abuse authority that is given to them.

Compare Absurdly Powerful Student Council, another example of students having way more authority than they would in real life. See also Red Armband of Leadership, which is essentially the Japanese version of this trope.

Eric gets a little carried away when given the responsibility of 'Hall Monitor'.

Eric gets a little carried away when given the responsibility of 'Hall Monitor'.