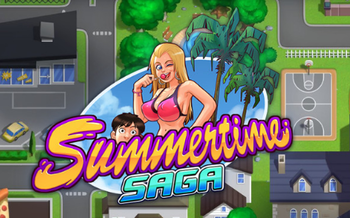 The Best Summer Ever, Or At Least the Longest
"It was originally just a test project to learn some Python scripting with the Renpy engine."
—Creator DarkCookie
Advertisement:

Summertime Saga is a game that is currently being developed in Ren'Py since 2016. It is perhaps the world's most elaborate Dating Sim, encompassing more than sixty-five characters, more than thirty locations, and more than twenty mini-games. It was created by DarkCookie for Kompas Productions and is funded entirely by Patreon backers who presently number more than 18,000.

The game focuses on a young man living a typical life in the average American town of Summerville, aside from the mysterious death of his father. Investigating his father's death leads him into a secret criminal organization. That is, if the player bothers with any of that instead of just exploring the locations and interacting with the cast members.