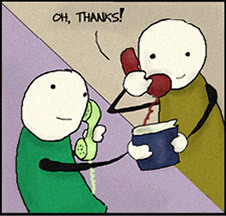 Some characters break the Fourth Wall just to acknowledge their universe's fictional nature and discuss the improbability of its laws. Some do it to have a chat with their creator or the audience, or even threaten them.

But others do it for a practical reason: they use elements from beyond the Fourth Wall to help them achieve some kind of in-universe goal. This is a supertrope to Reading Ahead in the Script, when they cheat to see what the plot has in store for them, and Ninja Prop, when elements of the medium itself are brought into the story.

A subtrope of Medium Awareness and Breaking the Fourth Wall. When this is initiated by the author, narrator, or audience instead of the characters, it comes From Beyond the Fourth Wall. See also No Fourth Wall, Fourth-Wall Observer.