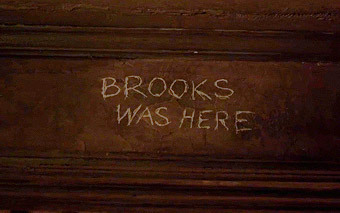 So you're somewhere — on vacation, at war, time traveling, teleporter accident, whatever — and you want something that'll stick around longer than just a Fun T-Shirt. That's easy, just vandalize a handy surface!note Vandalism is illegal in most places, so Don't Try This at Home. (Or anywhere else, really.)

This trope is pretty much as old as humanity itself (it's posited that there are hand-prints at Lascaux for this very reason, among other theories), but the Trope Namer is a bit of Memetic Mutation from World War II whose origin has many stories (see Real Life section below).

Do not confuse with the Styx album.