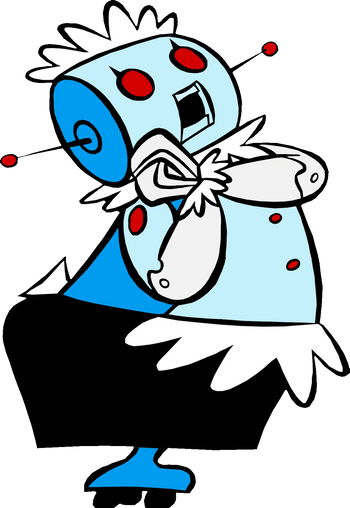 A clean home just warms her... circuits.
Housekeeping is repetitious and unnecessary drudgery; as an engineer, it offended me.
For the problem to be within the scope of one engineer, almost all of Flexible Frank had to be standard parts and must not involve any new principles...
Just what did I want Flexible Frank to do? Answer: any work a human being does around a house. He didn't have to play cards, make love, eat or sleep, but he did have to clean up after the card game, cook, make beds, and tend babies—at least he had to keep track of a baby's breathing and call someone if it changes.
— The Door into Summer, by Robert A. Heinlein
Advertisement:

A maid made to order!

Not to be confused with Super-Powered Robot Meter Maids (though there is some crossover), the Robot Maid (or Robot Butler) is Exactly What It Says on the Tin—a robot, ridiculously human or not, whose primary functions lie in performing household chores. They cook, clean house and look after your dog with precision. Whether or not they look human, they almost always have sophisticated AI—nobody bothers to ask why you're programming super-intelligent robots to do housework, but it's cool enough that it gets a pass. Of course, it could just be that being a maid is only said robot's day job—it might have a plethora of other, more crime-fighty functions.

Bonus points if they're young, female, and very, very sexy. Even more so if they actually wear the outfit.

Interestingly, the word "robot" in itself comes from a phrase meaning "someone who does manual labor," and was coined in a Czech play written in the 1920s.

Sister Trope to Robot Athlete and Robot Clown. Also compare Smart House and In the Future, We Still Have Roombas.