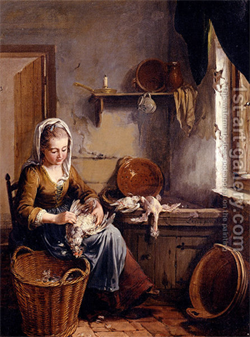 A Scullery Maid Preparing A Chicken by Williem Joseph Laquy.
"And then she went on and on till she came to a great house.
'Do you want a maid?' says she.
'No, we don’t,' said they.
'I haven't nowhere to go," says she; "and I ask no wages, and do any sort of work,' says she.
'Well,' said they, 'if you like to wash the pots and scrape the saucepans you may stay,' said they.
So she stayed there and washed the pots and scraped the saucepans and did all the dirty work."
— Cap o' Rushes
Advertisement:

Your less-developed fantasy worlds will contain no castle underlings save guards and kitchen staff. The guards lead a sad existence as Red Shirts, but the latter option presents a marvelous opportunity for anyone willing to submit to a little drudgery, if she can only get herself placed as a Scullery Maid.

If she's in for infiltration, scullery maids (or any other menial help staff) are practically invisible. They don't get very much access to sensitive areas of the castle, true, but chances are someone will notice our heroine's talents and give her a promotion, or else that she'll have a knack for attracting Exact Eavesdropping. If the infiltration has some sort of assassination in mind, kitchen staff have a perfect opportunity to poison people. If there's a ball, promotions can go quite high. It is, indeed the go-to job for runaway Fairy Tale Princesses.

If she's simply hiding out — well, no one suspects that The Chosen One is sweating over boiling potatoes.

Even if she's basically been enslaved into such a position, the Scullery Maid will find some way to prevail. Contrast with Meido, French Maid, and Ninja Maid for less realistic interpretations of the role.

For reference, the scullery is a small, hot, sweaty room behind the kitchen, where heavy, dirty, menial work, such as cleaning pots and pans, is carried out. As the lowest-ranking servant in the household, the pay of a scullery maid was below abysmal and she would often be pressed into service doing any unpleasant tasks around the house (like emptying chamber pots) and serving upon the rest of the servants. In Real Life, most non-enslaved scullery maids only stayed in the position for a year or two, just long enough to get the character reference required to move on to a better job, and would typically have little to no contact with the family members — all in all, not dissimilar to the modern Burger Fool.

The Spear Counterpart is also found, particularly in works more carefully based on the High Middle Ages or earlier. Medieval households generally employed men (scullions) to work in the scullery, as women were considered too weak to do the heavy work. It was only during the Victorian era that the job was mostly given to maids, as female servants were more plentiful and cheaper to hire. Compare Farm Boy.