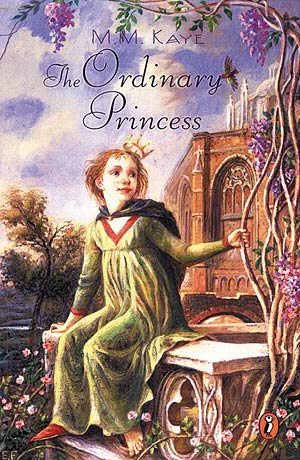 The Ordinary Princess is a Fairy Tale novel written by M.M. Kaye.

The story starts when the birth of Princess Amethyst Alexandra Augusta Araminta Adelaide Aurelia Anne is announced. The princess is going to be the seventh child born to King Hudlebrand and Queen Rodehesia, and everyone knows that the seventh child is always the nicest, most beautiful, kindest and all around best child to be born. Fairies are invited to her Christening, and the all give her gifts. Except of course, for beauty, as she is the seventh child and already beautiful.

Then comes in the fairy Crustacea who's old and grumpy, and decides to give the princess the gift/curse of being "ordinary".

As Princess Amy (Amethyst Alexandra Augusta Araminta Adelaide Aurelia Anne is not the name for someone so ordinary), she likes to do ordinary things, much to the despair of her parents. By the time she is of marriageable age, she is quite un-Princess-like, and no one wants to marry her. Her parents decide that they will hire a dragon, and whoever beats the dragon has to marry Amy.

Amy doesn't like this plan, and so she decides to run away from home.

Eventually Amy ends up working as a scullery maid in a kingdom far far away, where she meets Peregrine, and shares illicit ice cream with him. Of course, Peregrine is hiding a secret of his own...