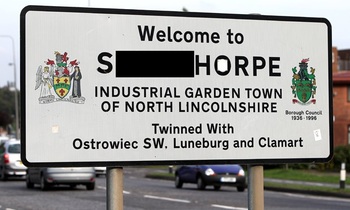 Censorship can be so banal.
"It's well documented in official records that the city's original name was 'Snottingham' or 'home of Snotts', but when the Normans came, they couldn't pronounce the initial letter `S', so decreed the town be called 'Nottingham' or the 'home of Notts'. It's easy to understand why this change was resisted so fiercely by the people of Scunthorpe."
— I'm Sorry I Haven't a Clue
Advertisement:

We all know automatic profanity filters on message boards and elsewhere on the Internet can be ridiculously and unimaginatively strict. But the problem is much worse: Sometimes, it sees swearwords inside other words. Thus, you can get hilarious Malapropers that will surely make you "sblackpersoner" — like "hecko" instead of "hello", or "teasfecesn" instead of "teaspoon" — or else you get results like "cl***" instead of "class", ironically making those words more profane, not less (***uming, of course, that the filter doesn't outright censor the whole message and automatically ban you from the board).

This is known as the Scunthorpe Problem,

after an incident in 1996 when AOL's rather simple-minded dirty-word filter prevented residents of several English towns and counties — among them Scunthorpe, Penistone, Lightwater and Middlesex — from creating accounts with AOL because it matched strings within the town names to "banned" words. Since it also checked the town names against the postal codes, users from these towns could not get around it by entering modified versions of the names — they were darned if they did, darned if they didn't. The ubiquity of the trope suggests that the profanity filter industry employs a lot of very lazy programmers. Read this

to see what they likely have to wrestle with. And of course when anyone reads some bizarrely censored text, they are absolutely going to assume that you swore like a drunken sailor at them, with either terrible or hilarious results.

While most filters will remove offending words, a few have attempted to replace the words with less offensive alternatives, resulting in a rare variant of this trope known as the "clbuttic mistake". Examples

Compare Censored for Comedy. See also The Problem with Pen Island. If this is invoked for humor, the mods and admins may be having Fun with Autocensors. May overlap with Have a Gay Old Time. For any actual problems with Scunthorpe, see Place Worse Than Death.

Video Games
Other Software
Other
Whoa, I've spent this much time on TV Tropes?! Better get back to my U.S. History homework and study the Consbreastution...