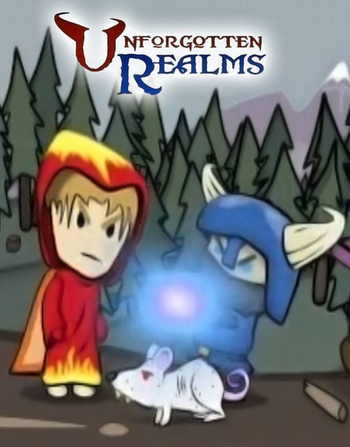 Unforgotten Realms is a web animation following the adventures of Sir Schmoopy of Awesometon, dual-nunchuck-weilding sorcerer, and Eluamous Nailo, wizard in-training, as they quest to find a magical herb that will cure Sir Schmoopy's dying grandmother of her illness. Wait, no. Actually, the show follows Rob and Mike, two "friends", as they play Unforgotten Realms, Mike's roleplaying game as Sir Schmoopy and Eluamous Nailo, respectively. Rob's... interesting roleplaying style quickly and frequently results in throwing Mike's game off the rails, no matter how hard Mike tries to keep things on track. The group is quick to pick up two more allies: Petey, the (totally not evil) Undead dire rat, and Jacques, the magical talking axe. Other important characters include Evil Overlord Timmy the Evil, who plans to destroy Sir Schmoopy, Roamin the crime-solving rank-11 paladin, who tracks down crime with Gaary, a midget who is far more competent then Roamin, and the mysterious Kobolds.

The series was originally created as a series of poorly-drawn flash animations on Newgrounds, but after seven episodes, the creator was hired to make Unforgotten Realms for The Escapist

, and proceeded to reboot the series, starting with episode one, and making a new episode every other week. The new series follows the same plot as the first one, and the first three episodes are the same as the first three of "Season Zero", with better animation and plot, but from the fourth episode on, it has deviated from the old series into something with a good deal more plot and direction, while keeping many of the old and favorite jokes and catch-phrases.

The majority of the humor comes from Sir Schmoopy's interactions with the campaign world, which often results in the plot being ignored, strange characters showing up, and explosions.

The show's contract with the Escapist recently ran out, causing the show to be rather unceremoniously removed from the index on the main page. They can still be viewed there as well as the old episodes which are still on Newgrounds.

of the first season while he produces the rest of the the third season and eventually a fourth. This information is available on the website at http://www.urealms.com

. He also produces the GRR Podcast with Gaary and Roamin's real life counterparts, as well as doing a daily (usually) stream http://www.twitch.tv/rurikar22/videos

In 2012, the series was put on hiatus as Rob was working on an Unforgotten Realms videogame

. Unfortunately, due to financial and personal issues, Robert Moran canceled both the game and the series itself.

In 2015, the series was brought back as a Board game called Unforgotten Realms Live, later renamed U Realms Live.

Judge: That's it, Schmoopy! I'm sick of you insulting me! I shall cast a curse on you that if you insult me again, you shall explode into a million-billon pieces!
Schmoopy: God, Eluamous, this judge is a total dick!
Judge: OH GOD HIT THE DECK!!!!