Video Game / Tales of the Rays 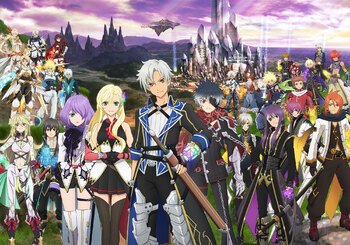 Mileena, Ix and everyone from the Tales Series
Advertisement:

Tales of the Rays is a free to play Crisis Crossover mobile game for Android and IOS featuring characters from the Tales series.

The gameplay faithfully recreates the series' tried and true Linear Motion Battle System, resulting in fast-paced, Fighting Game style combos, as well as CPU controlled allies (with adjustable AI) in a fully 3D battlefield. Instead of gaining them exclusively through the "gacha" roll mechanic, characters are given to you for free as rewards for playing the game (either on its main quest or in side events), and the gacha style summoning aspect is only for equipment (and the attached skills) for said characters.

Taking place in the world of Tir Na Nog, our heroes Ix and Mileena enjoy a quiet life on their island village, until one day a meteor storm strikes and destroys it. They soon learn the meteors were actually fragments of the Aegis that protects Tir Na Nog from falling apart, and that as the last surviving Mirrists, they are the only people capable of saving the world. In order to do so they must create "exoflections", bringing about lands based on reflections of alternate worlds and the people within them, and destroy the threats to the Aegis known as Shimmera Glass they find within them. Of course, these exoflected worlds are based on existing Tales titles, and familiar characters join the party to help them on their quest, which is where the Crossover elements come in.

Bandai Namco was unsatisfied with its performance outside of Japan, and decided to shutter the global English version in late March of 2018, with the final switch being flipped on May 29th of that year.

The game's story is currently split into four arcs. The second arc is subtitled Mirrage Prison, the third arc is subtitled Fairy's Requiem and the fourth and final arc, subtitled Last Cradle was released in October 2020 and concluded November 2022.

A short animation titled Tales of the Rays: Everlasting Destiny featuring Stahn Aileron & Leon Magnus was also released. It focuses on the two's off-screen activities during Mirrage Prison's final chapter, and can be viewed in-game.